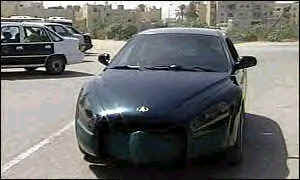 Saroukh el-Jamahiriya (Libyan rocket)
(Libya)
The car was unveiled on the 30th anniversary of the revolution which propelled the Libyan leader to power. The Saroukh el-Jamahiriya (Libyan rocket) a five-passenger saloon in a metallic Libyan revolutionary green with tinted windows, was launched at a special summit of the Organisation of African Unity organised by Colonel Gaddafi. The car has the aerodynamic lines of conventional models but the front and rear ends are rocket-shaped. The interior is replete with air bags, an inbuilt electronic defense system, and a collapsible bumper which protects passengers in head-on collisions. Revolutionary Dukhali Al-Meghareff, chairman of the Libyan Arab Domestic Investment company which produced the prototype, billed it as revolutionary in automotive history. He said it was developed from safety ideas conceived by Gaddafi. The company plans to set up a factory next month in Tripoli, the Libyan capital, to start production. "The leader spent so many hours of his valuable time thinking of an effective solution. It is the safest car produced anywhere," Mr Meghareff said. "The invention of the safest car in the world is proof that the Libyan revolution is built on the happiness of man."
on April 03, 2009
Email ThisBlogThis!Share to TwitterShare to FacebookShare to Pinterest
Newer Post Older Post Home