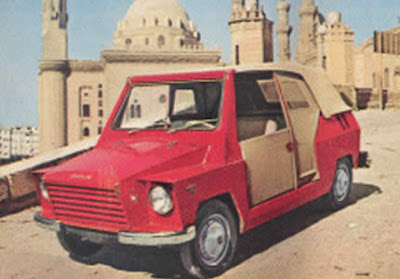 The NSU Ramses Utilica was the first car produced in Egypt, and was the result of a coorporation between the new egyptian car firm Egyptian Automotive Co., and the german NSU. The factory was located right next to the Great Pyramids. Plans were to produce around 10.000 cars a year, most of the work being manual labor.

The NSU Ramses used the Prinz 30 as it's basis. The body, looking something like a VW Kübelwagen; it was much more square then the original Prinz, creating more space in the front luggage compartment. The square form was the result of the absence of equipment to mold metal plates in more streamlined forms. The doors and passenger windows where made of canvas on a frame, and could be complete removed. The soft top could be folded back, just like on an ordinary cabrio.

The only chrome parts that could be found on the car were the front and rear fenders - in the heat and rough egyptian environment, chrome parts tend to show blisters in a very short period of time.
on April 03, 2009
Email ThisBlogThis!Share to TwitterShare to FacebookShare to Pinterest
Newer Post Older Post Home