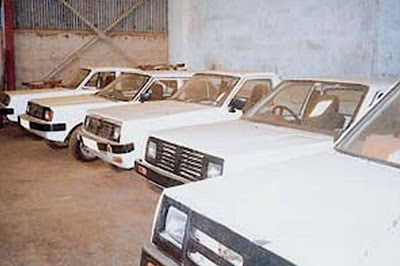 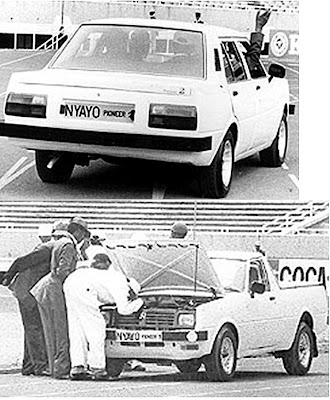 nitiating the idea of a Kenyan car in 1986, former President Daniel arap Moi asked the University of Nairobi to produce a vehicle, 'however ugly or slow it may be'.

The cars were not ugly. They were not very slow. During the test runs, the cars could attain a speed of 120 km per hour, according to a project engineer who used to drive the cars along Mombasa Road to as far as Sultan Hamud.

These first ever Kenyan made cars - The Pioneer Nyayo Cars - now parked and gleaming clean at the Kenya Railways grounds - were, according to Mr Mogere, manufactured from locally available raw materials, resources and expertise.

The car parts were either produced at military bases or at the Kenya Railways Central Workshops. And in 1990, President Moi launched three new Nyayo cars at the Kasarani Sports Complex.

With the successful completion of the first phase - the production of the prototypes and the subsequent establishment of the Nyayo Motor Corporation - the Government set in motion the establishment of the necessary plants for mass production. All in all, the Government needed to establish 11 plants at an estimated cost of Sh 7.8 billion. The Government could only afford two plants - the General Machining Complex comprising of advanced computerized equipment for machining automotive parts, and a Ductile Iron Foundry.

Demands from major donors to sell off non-performing parastatals made it difficult for the Government to inject more funds into the project.

Determined to put a Kenyan car on the road, the Government, in 1999, insisted that the project operate on a commercial basis and be self-sustaining. But the Government continued allocating money to the car project every year. However, much of the allocations, over 60 per cent, were never disbursed due to lack of funds.
on April 03, 2009
Email ThisBlogThis!Share to TwitterShare to FacebookShare to Pinterest
Newer Post Older Post Home