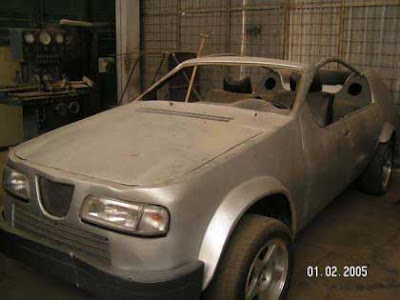 Enoch Afudego, a 39-year old Ghanaian mechanic has successfully assembled a saloon car. The car, which he named OTAVI, had the entire body including the bonnet, roof and boot designed and moulded with scrap metal and has the engine of an Opel Ascona.

In an interview with the Ghana News Agency in Accra, Mr Afudego said it took him four months to build the car, which he mostly did at his leisure hours. He said after completing West Africa Secondary School, he did not learn any trade nor pursue his education further.

He said the idea of building the car begun somewhere in 1984, when he visited Liberty Baptist Church where he was inspired in a sermon preached by the Rev. Christian Dogor, General Overseer of the church. He said the Pastor challenged the congregation to unearth their God given talents and put it to use since that was the only way one could achieve greatness.

Mr Afudegu said some days later he began by designing a bicycle, which he later perfected. He said after his success with the bicycle, he started building the car, which finally resulted in the manufacture of the Octavi. He noted that he was in the process of manufacturing a bus and an amphibian car.

The car, which was driven from Tarkwa to the office of the GNA, looked quite rugged for the Ghanaian terrain. Mr Afudego called on the government and other philanthropists to assist him produce the cars on a large scale for local use.
on April 03, 2009
Email ThisBlogThis!Share to TwitterShare to FacebookShare to Pinterest
Newer Post Older Post Home