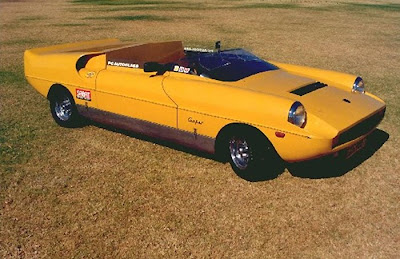 "Being a penniless youth and having abused my mildly tuned 850 in the mid 60s with rallying and a foray into racing, I decided that a sports car would be a great idea to put on the track. No money meant that 'if you can't buy one, make one'! Having had inspiration from a road test published in Cars & Car Conversions mag of the Unipower GT and clutching my copy (original 1969 version still in existence) of Allan Staniforth‘s High Speed-Low Cost, 'Banshee' was created over a period of about 15 years during which time I was transferred by my employer to five cities in South Africa, Banshee having covered about 2,500 miles without putting in any fuel!

"Regrettably, the Sportscar class was abolished during the course of building and my racing aspirations were curtailed anyway by the intrusion of marriage. Banshee is still hauled out on high days and holidays but has completed three 'Durban Dash' events over the past years (800 mile round trip each from Johannesburg to Durban); (photo T. van Zyl)
on April 02, 2009
Email ThisBlogThis!Share to TwitterShare to FacebookShare to Pinterest
Newer Post Older Post Home