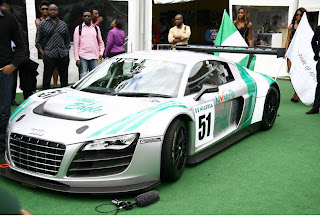 Could motorsports become a major industry in football-obsessed Nigeria? It will be if one Nigerian businessman has his way.

London-based entrepreneur Ribi Adeshokan has entered his country into the lavish and highly-competitive world of car racing and has ambitious plans to drive African motorsport and build a multi-million dollar racing industry on the continent.

Called Nigeria Racing Eagle (NRE), the team says it hopes to compete at major motor racing events over the next few months, including the FIA GT3 series and sports car endurance races.

"My philosophy is whatever I want to do, I go for the best," Adeshokan, team principal and owner of NRE said Monday, moments after unveiling a green and silver Audi R8 LMS as the team's car at the Africa Village, a London Olympics exhibition site designed to highlight the continent's cultural, artistic and sport assets.

Adeshokan says his team will proudly "fly the flag of Africa," being the first Nigerian racing team to represent the continent at world motorsports.

Image gallery on the link below
http://vivacitypr.blogspot.com/2012/04/team-nigeria-unveil-their-brand-new.html