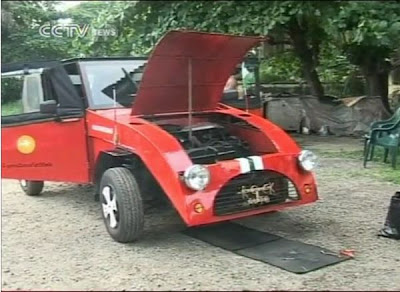 Rock Auto(West Africa) Nigeria's answer to practical mobility. Rock Auto is the name of the vehicle and Mr Sunday Okpere is its creator.

Thirty five year-old Okpere has been fine tuning the "Rock Auto" persistently for the past four months to ensure its engine runs smoothly and the body looks curvy and flashy like any of the latest imported models on sale in Nigeria.
Okpere said his interest in building vehicles started when he was a child, making toy cars from discarded tins and wires for his friends at school.
Decades later, he decided to unveil his first moving vehicle.
The Rock Auto runs on a Peugeot engine. Okpere says he could not raise funds to build his own engine. The rest of the car is made up of discarded material and scrap metal collected from dumpsites.
Okpere says the Rock Auto is just the beginning.
"There are a lot of things in my brain, because what I am thinking of now is how to build a car for the masses, that will be cheaper for cheaper transport, that is the basic thing," he said.
The Rock auto may not be flashy but it attracts several admirers from his neighborhood of Yaba in the sprawling commercial city of Lagos.
It comes with a set of motorcycle headlights and side indicators, the dash board is bare except for a speedometer and fuel gauge. The 'sound system' is optional -- a transistor radio hung from the roof, and can be taken off and carried wherever one goes to avoid break ins.
It can comfortably carry four passengers.
Okpere declined to reveal how much money he had spent on his innovation and how much he would be willing to sell it for. It has a top speed of 100km/h